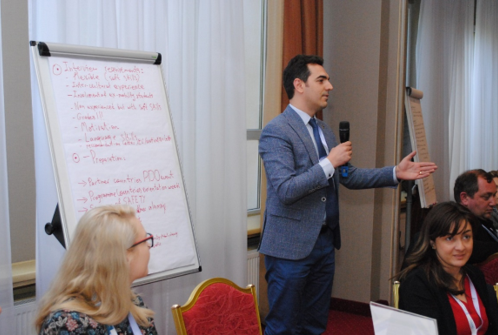 As a continuation of participation in the most important international activities for the development of universities, UBT has been invited to participate in the International Conference of European Universities in Poland, for the establishment of agreements, through which it will be possible to carry out mobility projects between universities within the Erasmus Project.

In the framework of this conference, Kosovo and UBT were represented by the Pro-Dean of Civil Engineering Faculty, prof. dr Visar Krelani.

The conference was organized by the Erasmus Office in Poland and the Ministry of Education of this country.

On behalf of this conference, each participating country has been presented by providing statistics regarding the number of students in the countries, the number of universities, professors, double degrees, the number of international agreements, etc.

There has been given a key importance to the communication of universities, considering the contacts between professors, faculties and universities, in order to achieve success in the implementation of joint European projects. There were also discussed other important topics, including academic recognition among universities in mobility cases and the documents that need to be signed on the occasion of mobility by the sending university and host university, as well as explaining the main aspects that should to be considered in the cases of mobility.

In order to apply the information received, there were also established working groups in which the mentioned issues were discussed and the experiences of different universities were presented in these aspects.

In these working groups, prof. Visar Krelani was also the team leader of the group, who explained the experiences of UBT and other members of the group on issues discussed in the respective group.

In addition to the importance of the cooperation, representatives of the universities coming from different countries expressed their interest in enhancing cooperation with Kosovo, and particularly with UBT, as an opportunity to be funded by Erasmus.