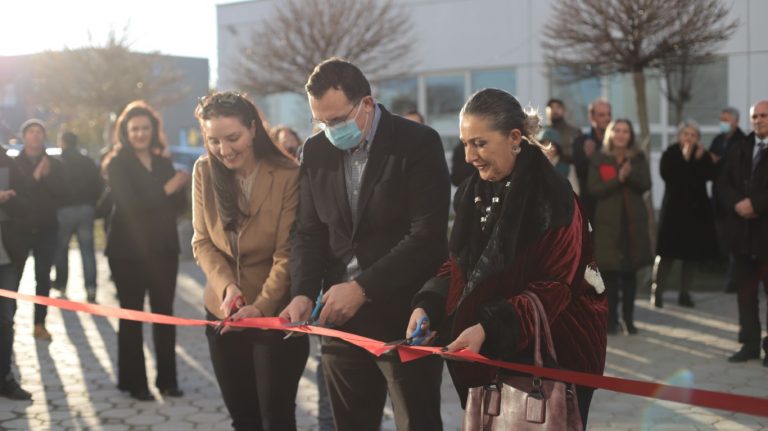 In a solemn ceremony led by the rector of UBT, prof.dr. Edmond Hajrizi, launched the largest and most modern center for science, technology and innovation – UBT Smart City Center.

The building, which itself has 28 thousand square meters, with a special architecture of high construction standards, laboratories, dormitory, library, kitchen, incubators, small industries, creative centers, as well as sports facilities, will be the place of future generations, where their knowledge will increase even more within this unique center.

Rector of UBT, prof.dr. Edmond Hajrizi, said that this facility joins an innovative campus with a wide ecosystem of knowledge, not forgetting the partners who helped concretize a giant project like today.

The Director of Planning and Urbanism in the Municipality of Lipjan, Emina Rexhiq, on behalf of Mayor Ahmeti, welcomed the work and great commitment of UBT in the implementation of this project, bringing another dimension of science, technology and innovation centers in Kosovo .

One of the supporters of the project, Professor Skënder Kosumi, said that in this project a lot of work has been done in the process of thinking and planning, in order for the project to come out as good as possible, as he said that through this project in Kosovo they have established a model of large facilities of the state of Austria.

The owner of the construction company “Fidola”, Isak Fejza, praised UBT for the work and commitment, as he said that a great deal of work has been done in this facility, appreciating the close cooperation with Rector Hajrizi.

Rector of UBT, prof.dr. Edmond Hajrizi, has shared a gratitude to each of the collaborators who have helped in the implementation of this project, starting from the Municipality of Lipjan, Professor Skënder Kosumi, and the construction company “Fidola”.