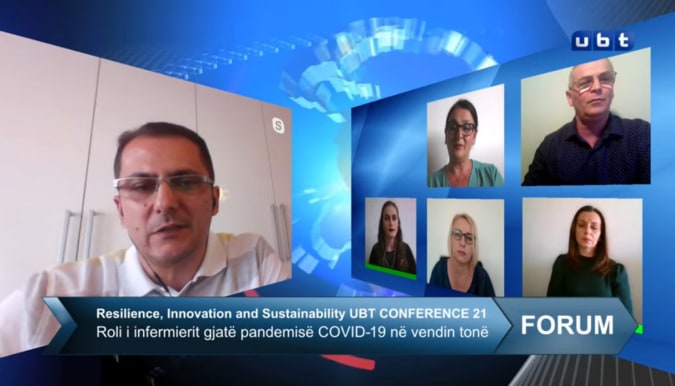 On the behalf of the Day of Nursing as the well as following the online conferences which are highly necessary owing to the fact that there are closely elaborated the most concerning issues. Due to the fact, there was held an online video conference at UBT Television and Radio “Campus”, with a frequency of 100.7FM, namely with the topic, “The role of the nurse during the COVID-19 pandemic in our country”, where it was widely discussed about the role and importance of nursing, the challenges as well as the professors availed from opportunity to reveal their professional experiences.

The opening session of the conference was made by the Dean of the Faculty of Nursing, Fitim Alidema, who emphasized that in recent years on the occasion of marking the Day of Nursing together with professors and students of this faculty have provided free advice and services to citizens of the Republic of Kosovo, ranging from blood pressure measurement, glycerin measurement to the distribution of brochures.

Meanwhile, professor Abdullah Gruda, pointed out that this event marks is a special day for the nursing profession as the WHO for the first time in history has set 2020 as the international year of nursing and midwifery, whose motto is:” World nursing for health”.

“During our work as a nurse we are leaded by a commitment, which is known as our oath where the nurse swears that: “I will spend my whole life in moral purity, to practice the profession faithfully, to give up everything that is malicious, I will not to give with his knowledge no harmful drugs, I will do everything for his professional development, I will keep everything secret even from the family of respective patient, I will strongly collaborate with the doctor who is devoted and strives for the well-being of the patients”, underlined Gruda.

Among others, professor Shqipe Agushi, while talking about the role and importance of the nursing profession, stressed that nursing has emerged as the only active main partner in any primary and secondary efforts to prevent infectious diseases.

“In any country, regardless of socio-economic development, nursing is considered as a profession which asks for devotion, confrontation, prevention of diseases and proper treatment of patients. The main capacity and effectiveness of nurses is further developed during these crises, such as pandemics, during wars and during major natural disasters, “claimed Agushi.

“Whatever happens to them, no matter how much they are underestimated by other professions, they should never abandon their profession and always be with the patient and for the patient”, was the message of Professor Drita Berisha for all students and nurses.

Furthermore, Berisha underscored that with this state of pandemic, the first to face and adapt are the white-collar workers, nurses, whereas in all health structures they face the unknown and the state of being humane is the gist of this profession.”The biggest challenge has been risk, so endurance until the end to be untouchable by this pandemic for the mere reason, for the oath we have given,” put it professor Drita Berisha.

In this regard, professor Nadije Pajaziti emphasized that nurses comprise more than half of the world’s healthcare workers, but there is still an immediate shortage of 5.9 million other nurses still needed, especially in the least developed countries.”Nurses are exhausted from their demanding work as they are working long hours, with few breaks, without protective equipment, to carry out their challenging profession and fighting pandemics,” noted Pajaziti.

Professor Ariana Zenuni said that this day preserves the awareness and value of nursing, helps to educate the role of nurses in meeting the needs of patient care. Despite the fact, while praising all the nurses and students on Nurse’s Day, UBT Rector, prof.dr. Edmond Hajrizi, emphasized that it is not by chance that nursing day is considered an international day both in times of pandemics and even before pandemics, is a process and a sacred profession in itself, which is directly related to humans welfare.

“Nursing has been announced as a special profession within the European Commission, it is an equal competence in the health services chain, therefore education and study in this regard, it comprises an opportunity for further education at the master’s and doctoral level,” noted Hajrizi.

Rector Hajrizi further stressed that, UBT taking into account the role of health in general is positioned to help medical developments including nursing, where the health staff of about 200 employees as teachers are committed to our students to prepare a staff with competencies, proper features and attributes that are necessary for our country. As a result, it is very important that the nursing profession is not formal, not just a degree, but is related to gaining in-depth knowledge and utmost competencies.

“UBT is comprised of a modern infrastructure and will continue to support the nursing profession through education at the basic academic level as well as with specializations at the master level in certain fields. Besides that we also also offer continuous training in the polyclinic of UBT, which is an innovative center, a center which enables the stimulation of clinical aspects which as such has been established and implemented for the first time in the Balkans “, said Hajrizi.

Meanwhile, Rector Hajrizi emphasized that as an added to nursing we will add the elements of digitalization and services through new technologies, where the patient can be monitored in real time 24/7, through which diagnoses and prevention of various diseases, which will lead to a further development.

The conference details can be found at the link: https://www.youtube.com/watch?v=_5hR-ZpcDKc

Within the framework of Faculty of Media and Communication, was held a thematic lecture on the role of the media in sports was held 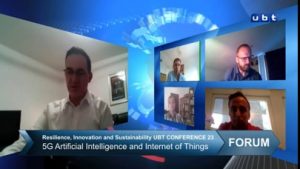 UBT held a conference on the topic: “5G Artificial Intelligence and Internet of Things”