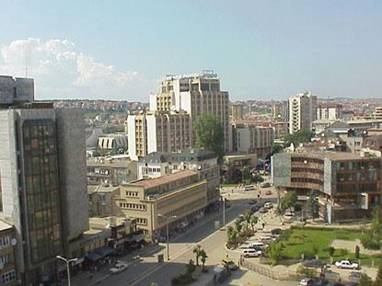 Kosovo stretches between the 42°and 44°parallels of the northern hemisphere and between 200 and 220 meridians. Kosovo is situated in the central part of the Balkan Peninsula. Southeastern Europe. It covers a surface of 10908 km and inhabits a population of over 2 million. Over 40 % of its inhabitants are of 0-15 age. Its population is multiethnic of which 92% Albanian, 8% other (Serbs, Turks, Bosnian, Romas, Ashkali, etc.) The Albanian population belongs to three religions: Muslim, Catholic, and Orthodox.

Kosovo has inherited a rich cultural and spiritual wealth as testified by the archaeological finds within the territory from various periods in time. Archaeological discoveries of the Neolithic period also prove that the Illyrians as predecessors of Albanians stretched widely in the Illyric Peninsula. The climate and temperatures in Kosovo vary during the year depending from the four seasons. The winter is with snow and low temperature, e.g. the average temperature in Prishtina is -2°C. Spring and autumn are cool and with falls, while summer is hot and dry with average temperature of up to +22 C. extreme temperature in Kosovo during the year reach between -25 °C and +38°C.

Prishtina became the capital city of Kosovo after World War Two and an important political, administrative and university centre. In Middle Ages Prishtina was an important trade centre. Today the city has over 500,000 inhabitants living in a narrow space. Prishtina also has its international airport and good road and railway connection with neighboring countries. In the vicinity of 15 km in the south of Prishtina the town Ulpiana was discovered built in Roman times and rebuilt by Emperor Justinian.

University for Business and Technology

University for Business and Technology has combined all the advantages of innovative universitiesin the world. Contemporary study programs licensed and accredited according to international quality standards, internationally recognized degrees, partnership with well known universities and institutions from EU and USA, opportunities for experiences abroad (professional studies and practices), modern infrastructure, modern organization and management of the university (in compliance with ISO 9001), direct link to economy, scientific and research projects with international character, transfer of high technology, as well as high motivation of students and personnel, make UBT a modern university in Europe.